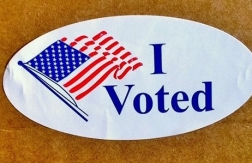 With the fall election just days away, anyone who is involved in non-profit work should take care that their board and organization do not jeopardize their tax exempt status by participating in a political campaign or activity that favors a specific candidate.
According to the IRS website:
"Under the Internal Revenue Code, all section 501(c)(3) organizations are absolutely prohibited from directly or indirectly participating in, or intervening in, any political campaign on behalf of (or in opposition to) any candidate for elective public office. Contributions to political campaign funds or public statements of position (verbal or written) made on behalf of the organization in favor of or in opposition to any candidate for public office clearly violate the prohibition against political campaign activity.  Violating this prohibition may result in denial or revocation of tax-exempt status and the imposition of certain excise taxes.

Certain activities or expenditures may not be prohibited depending on the facts and circumstances.  For example, certain voter education activities (including presenting public forums and publishing voter education guides) conducted in a non-partisan manner do not constitute prohibited political campaign activity. In addition, other activities intended to encourage people to participate in the electoral process, such as voter registration and get-out-the-vote drives, would not be prohibited political campaign activity if conducted in a non-partisan manner."